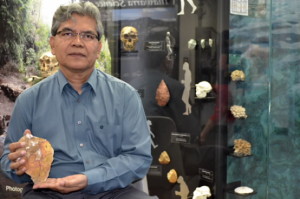 Researchers excavating an Indonesian cave have discovered first example of rock art in Sumatra as well as the remains 66 people.

The unprecedented number of finds in Sumatra’s Harimau (Tiger) Cave, indicate to the archaeologists that the cave had been an important site used by Indonesian farmers for a very long time.

The discovery will help give insights into the complex cultural behaviours of prehistoric human occupation of the Southeast Asians who lived in Sumatra’s limestone caves and used them as a workshop and burial ground.

Although these initial finds date back only about 3,000 years, only a short period compared to other sites around the world, much of the cave remains to be excavated and leaves researchers hopeful that they will uncover far older evidence of human occupation in the cave.

Researchers To Collaborate On Ancient Cave Discovery [University of Wollongong]