Dog Survives Weeks After Falling in a Deep Tennessee Cave 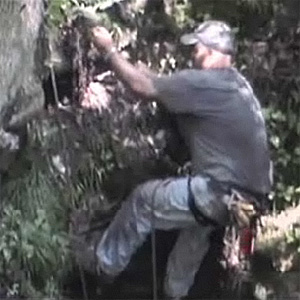 A dog was rescued from a deep cave in Tennessee’s Union County recently after it was heard barking by hunters.

On Saturday, June 2nd two hunters in the Fullerton Bend Wilderness Area near Speedwell, followed the sound of barking until they reached a deep pit, but they could not see a dog inside. They contacted the Union County Sheriff’s Office who in turn called the county Humane Society to help rescue the stranded animal.

Human Society workers arrived at the site on Saturday evening, but they too were unprepared to enter the very deep cave. Finally on Sunday shelter manager Tim Roberts and his friend, Travis Webster, entered what turned out to be a 45 meter (150 foot) deep cave to retrieve the dog.

In an operation that lasted almost six hours the two were successfully able to retrieve the wounded animal, which despite a fractured hind leg, was up and moving around. Remarkable shape considering that rescuers estimate that the dog had been in the cave for at least two weeks, surviving thanks to water available inside the cave.

Despite wearing a collar, the dog lacked identification and will be put up for adoption if the owners don’t come forward. Dubbed “Rocky”, the dog required extensive surgery to repair his leg. If you would like to help out, you can make a donation by calling the Union County Humane Society at 865-992-7969.