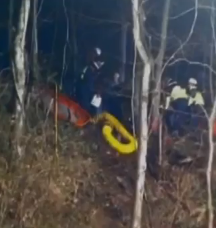 While exploring the 90 or so meter (300 foot) long cave with a group, the man, believed to be in his 20’s, became trapped when one of his legs became wedged in some rocks approximately 60 meters (200 feet) from the entrance.

Folks he was with alerted the authorities just after 5:30pm, sending pictures taken with the mobile phones to give rescuers an idea of what to expect.

Technical rescue crews from Frederick, Montgomery and Washington counties soon arrived and began to extract the man. An air chisel was eventually employed to remove some of the rock and free the man’s leg.

At around 10:15 pm, after an almost four-hour ordeal, the man was brought out of the cave.

Although he appeared uninjured, he was taken to R Adams Cowley Shock Trauma Center in Baltimore as a precaution.

Update: Check out this gallery of photos from the rescue.