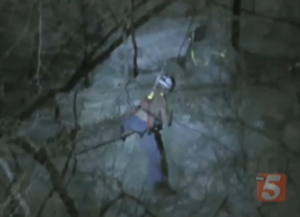 Trapped man being lowered by rescuers. Screengrab via newschannel5.com

A man was rescued from a cliff on Saturday after spending three hours trapped on a ledge.

40-year-old Tommy Powell of Murfreesboro, Tennessee had been exploring caves along the cliff when he slipped and slid down to a ledge 30 meters (100 feet) from the bottom of the cliff.

Unable to climb up or down, Tennessee’s Dickson County Search and Rescue were called to help him down.

During the rescue, which took just under an hour, crews repelled down the cliff and fit the man in a harness before lowering him safely to the ground.

No injuries everything was fine. He was actually just sitting up there chilling out talking to everybody down here, some of his buddies were kind of laughing at him up there but we did get him down safely. Brandon Wilkerson, Dickson County Search and Rescue

The entire rescue was captured on video part of which is available by visiting newschannel5.com.