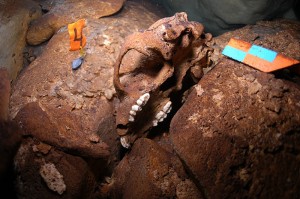 Researchers studying the cenotes of the Yucatán have discovered a record of climate change that dates back to the Pleistocene – 15,000 years ago – in a cenote located between the towns of Sotuta and Homun.

Marks on the walls of the cenote, which is over 50 meters (164 feet) deep, show the different levels of water it has had in the past 12,000 years. These marks correspond with climatic changes in this region such as periods of prolonged droughts which would have lowered the water level in the cave.

Although not yet confirmed, it is suspected that these marks will correlate with the historical record of droughts in the 8th, 9th and 10th centuries, the Terminal Classic and Post Classic ages of the Maya.

Contributing to the hypothesis is a Maya vessel, found to contain human bones, which was discovered 0.6 meters (two feet) deep in the cenote. The type of container appears to match the style of those used between the 9th and 10th centuries.

While the cenote is now filled with water, it would have been dry prior to the last glaciation which occurred during the Pleistocene period. A testament to that are the four skulls and jaws of bears that were found in the deepest part of the cenote. The remains are though to be of the species Arctotherium, the largest carnivorous land mammal discovered to date, which became extinct around 11,300 years ago.

The National Institute of Anthropology and History (INAH), who headed the study with the Autonomous University of Yucatán (UADY), has also released a video featuring footage of the cenote on YouTube.