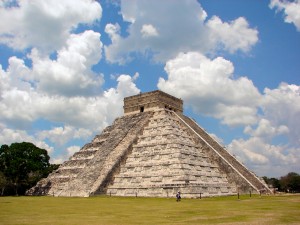 An expedition to a cenote at the well known archaeological site of Chichén Itzá in Mexico has led to a discovery of the bones of six humans, including two children, jade beads, shells, and stone tools.

The Cenote Cult archaeological project in association with Mexico’s National Institute of Anthropology and History, explored and surveyed 33 caves and cenotes at Maya sites across the Yucatán Peninsula looking specifically for evidence ritual activities.

It was within Holtun cenote, near the well known El Castillo in Chichén Itzá that the remains and other artifacts were found approximately 26 meters (85 feet) below ground and about 5 meters (16 feet) under the water. Additionally, they were found 21 meters (70 feet) down a horizontal passageway. Although not yet conclusive, archaeologists argue that the only way that the objects could have arrived there is for humans to have placed them deliberately during times of drought.

It is thought that the objects would have been involved in ritual human sacrifice which was practiced at the site sometime between 850 and 1250 AD. At the time the area would have been in the middle of a long-lasting drought, and it is possible they were used to try and appease the Maya rain god, Chaac.

Finding evidence of Maya human sacrifice within a cenotes supports the idea that sinkholes “represented thresholds of communication with the spiritual and sacred world that lay under the surface of the Earth,” says Anda, a professor at the Autonomous University of Yucatán.

Update: It has come to the attention of Caving News that along with the Mexico’s National Institute of Anthropology and History, the Cult of the Cenote Project is a combined US and Mexican organization which also includes the Autonomous University of Merida (UADY), members of the National Speleological Society, the Wisconsin Historical Society, and the Woods Hole Oceanographic Institute.

Likely due to translation errors, a number of other errors have also been discovered.

The horizontal passage mentioned above, where the remains and other artifacts were found, does not actually exist. In fact, most of the smaller artifacts and the vast majority of the remains were found on a shelf, which runs approximately 3/4 the distance around the roughly bell shaped cenote at between 5.5 – 6.5 meters (18 – 22 feet) deep.

The rest of the carved artifacts, sacrificial bowls and pottery were found at various depths on the debris cone, between 27 – 40 meters (88 and 130 feet) deep. 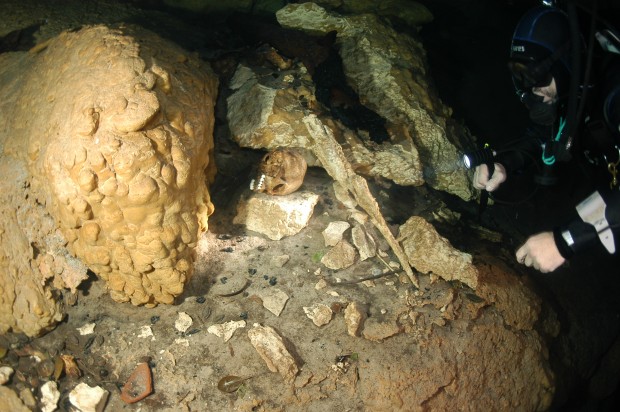