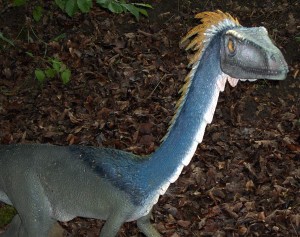 A group of mountain climbing cavers stumbled upon a series of what are likely dinosaur tracks this September while on an expedition to visit Giauli Cave.

In preparation of abseiling down to the cave, the team set up a small base camp near the north-east ridge of Mount Pelmo, part a mountain range in north-eastern Italy known as the Dolomites.

The tracks, discovered close to the camp, appear as five footprints in a row going the same direction with an even distance between them.

Upon analysis of the video and photographic evidence collected by the group, a paleontologist from the University of Padua, Matteo Belvedere, confirmed that marks do indeed seem to be the result of an impression with their alignment suggesting that of a biped animal.

Although a confirmation of the species was not able to be attained due to the poor condition of the prints, it has been suggested that given the dimensions and stride length, they likely belonged to a small carnivorous dinosaur similar to a Coelophysis.

Plans are underway for further surveys to be conducted next summer, which may reveal further tracks.

At around 3025 meters (9924 feet), the tracks, if confirmed, would be the second highest found in Europe, only 102 meters (335 feet) lower than that of the ones found atop Piz Mitgel in Switzerland.