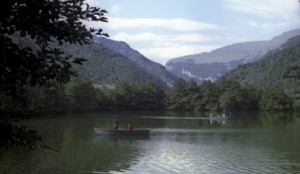 Photo by RIA Novosti via Voice of Russia

An international team of divers will be studying Russia’s Lake Goluboe (Blue) in early 2012 as part of an effort to search for underwater caves and artifacts.

The lake, known for its unique blue color, stays at a steady 9 degrees Celsius (48 degrees Fahrenheit), doesn’t freeze and emits hydrogen sulphide throughout the summer which gives it a peculiar odor and taste.

According to some, there is a strong possibility that the lake, 258 meters (846 feet) deep and the third deepest karst lake in the world, could be the resurgence of one of the world’s largest underwater cave systems.

Studies on the river that connect to the lake found flow rate of the water to be about 8 cubic meters (26 cubic feet) of water per minute. In addition to the water, somewhere between 30 and 50 cubic meters (98 and 164 cubic feet) a day of dissolved gypsum also pass into the river, signalling erosion of cavities somewhere down below.

Given it’s location – in the Caucasus, between the Black and Caspian Seas – there is also a strong likelihood of finding artifacts. A caravan route once ran nearby, and more recently transport trucks filled with wine and military hardware were allegedly disposed of in the lake at the close of the second world war.

Equipped with deepwater diving robots and 3D scanners, the team will set to work in early January.