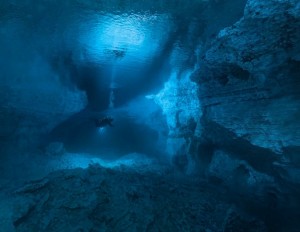 Created by a team from AirPano and Phototeam.pro, the same folks who worked on the Orda Cave Awareness Project in 2010, this 360 degree panorama was “the next logical step” to make this unreachable beauty accessible to most people.

Located on the shore of Kungur River in the southwest corner of Orda village in Russia’s Perm region, Orda cave is 5.1 kilometers (3.2 miles) long, with nearly all but 300 meters (984 feet) being under water.

It is impossible to set up a tripod or a panoramic head, which means that you won’t be able to mount your camera or strobe on a tripod. People can’t stand still, but without models you don’t see dimensions of a cave. There is no light source except for the one you bring with you. Radio synchronizers don’t work under water. So all of the above puts you in the most uncertain place for a photo shoot. Viktor Lyagushkin, Photographer

With the first underwater spherical photo panorama in a cave now complete, the team looks forward to a busy year as they plan to shoot “an entirely new series of unique underwater virtual tours that have never been done before in the world.”

Besides returning to Orda Cave, the team has a list of other locations to shoot including in the Baltic, the White Sea, the Blue Lake (Chirek-Kel) in Kabardino-Balkaria, the Tkhach Caves in Adygeya, the Issyk-Kul’ Lake, and land caves of Ural.

Check out the Panorama.