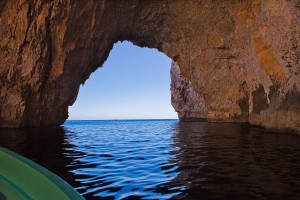 Looking out from inside the Malta’s Blue Grotto. Photo by Bengt Nyman/flickr

A helicopter came to the air of three divers after strong currents dragged them out to sea early this month.

Malta Today reports that the divers, two men and one women, had finished their dive at Malta’s Blue Grotto sea caverns on April 1st when they were dragged out to sea by strong winds and currents.

Malta had been experiencing very strong winds at the time of the incident.

An Italian military helicopter was diverted from a training mission to come to their aid, as were two Maltese rescue boats.

The three were winched up and taken to a waiting ambulance in St. Luke’s as a precautionary measure. They did not require medical assistance.

Not to be confused to the arguably more well-known Blue Grotto sea cave on the coast of the Italian island of Capri, Malta’s Blue Grotto refers to a number of sea caverns on its south coast.