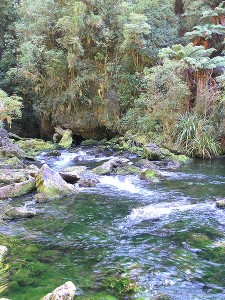 After spending two weeks on their third expedition to the cave, a group of Australian divers have discovered a link between New Zealand’s Pearse River and the Nettlebed Cave system.

On one of the dives, cave diver Craig Challen surpassed their previous record from last January of 194 meters (636 feet) and attained a depth of 221 metres (725 feet). All the while in glacial water that is just above freezing.

During the record-breaking plunge, the diver saw marker dye that was placed in the Nettlebed Cave system in an attempt to try to find the source for the Pearse River. Although it must be explored and surveyed for complete confirmation, this suggests that the Nettlebed Cave system is indeed linked to the Pearse River, which would also make the cave more one kilometer (1.6 miles) long.

Beyond 221 meters (725 feet), it is reported that the cave continues deeper, however despite the loads of technical gear, underwater habitats, heated suits and underwater scooters the team employs, it remains beyond human physical limits. As it is, a dive takes 17 hours, with four decompression stops in underwater habitats.