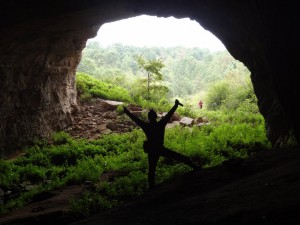 Photo by K. Stoilov via CaverInfo

A new Bulgarian-Chinese expedition to China’s Yunnan Province has resulted in the exploration and mapping of ten caves.

During the 20 day trip, ten days were spent working in the area of the Golingoshan National Nature Reserve in the Baoshan district along the border of Myanmar. The team of five Bulgarian, four Chinese and one greek caver, explored six horizontal and two vertical caves, the most interesting of which was Djin Fu Dong, a volcanic cave near Tengchong. It was 729 meters (2,392 feet) long and 94 meters (308 feet) deep. Also of note was Wushaonin Dong, the deepest pothole the team studied at a depth of -118 meters (-387 feet).

Approximately 400 km (250 miles) away the team spent two days concentrating on Swallow Cave, in the end mapping over 1.5 kilometers (0.93 miles) of galleries, making it the longest cave mapped during the trip. As well, around 10 hours of exploration in Da Shi Dong cave, netted the team 1.394 kilometers (0.86 miles), and making it the second longest.

During the final days of the trip the team visited four additional caves to carry out biospeleological research.