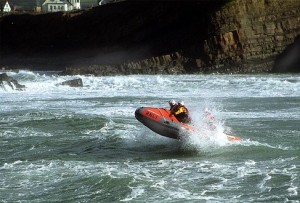 In a strange twist of fate, rescuers searching for a dog that had fallen off a cliff discovered a girl trapped in a cave by the rising tide.

Just after 6:00pm last Monday a rescuers were called to search for a dog which had fallen into the water at Greenaway near Rock, Cornwall.

As they approached the cliff, the RNLI crew spotted a young girl in a cave at the base of the cliffs. Cut off by the rising tide, she had only half an hour before she would have been swept out to sea.

The search for the dog was temporarily put on hold while the crew tried to reach the girl. Unfortunately due to conditions the boat could not get close enough and a crew member had to swim the 30 meters (100 feet) to reach her and bring her back to the boat.

The 15-year-old girl was safely returned to her parents who, on holiday from London, had not even realised she was missing.

This could have been a tragedy – and I do mean a tragedy in exactly that way, Martin Broadfoot, Rock RNLI spokesman

As luck would have it, the dog that caused the call out was found alive.

A dog falling over the cliff usually meant it was dead, but in this case it managed to get out of the water and was reunited with its owner. Martin Broadfoot, Rock RNLI spokesman