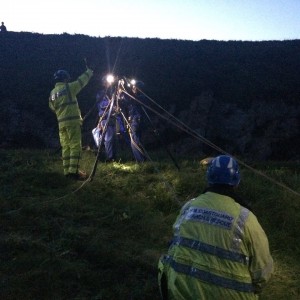 The Coastguard Rope Rescue Technician begins his descent to the cave. Photo via Coleraine Coastguard

A young man is safe after becoming stuck in a sea cave at Northern Ireland’s White Rocks coastal cliffs, near Portrush, on Monday evening.

Belfast Telegraph reports that the 19 year old man fell while exploring the cave. Somehow during the fall he dislodged a large boulder, estimated to weigh more than a tonne, which left him trapped.

Shortly after 10:00pm, the rescue call was received by Belfast Coastguard who dispatched Coleraine and Ballycastle Coastguard.

A Coastguard Rope Rescue Technician scaled the cliff to find the man at the base of a steep slope suffering from a minor leg injury. He performed first aid before hauling him to safety.

Once atop the cliffs, the man transported himself to hospital for further treatment.