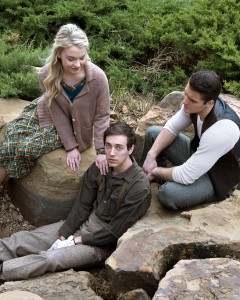 Based on a true story, Floyd Collins follows its title character, who chases a dream of fame and fortune by turning a Kentucky cave into a tourist attraction just to find himself trapped in a narrow crawlway 55 feet (17 meters) below the surface.

This critically acclaimed musical as been accredited as a skillful amalgamation of relationships, pride, commercialism, greed and a fight for sanity.

Floyd Collins originally premiered at the American Music Theater Festival, in Philadelphia, in 1994, before a short 25 show stint Off-Broadway at Playwrights Horizons, New York City, in 1996.

The effort to rescue the real Floyd Collins in 1925 was the biggest news story of the twentieth century since the sinking of the Titanic. Shannon Hurleigh, UCO Central Instructor of musical theatre and the production’s director

This UCO production will feature 22 Central students, ranging from freshman to graduate students.

All the performers have gone above and beyond to tackle this score, which stands as one of the more difficult pieces within modern musicals. Shannon Hurleigh, UCO Central Instructor of musical theatre and the production’s director