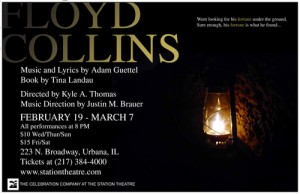 The acclaimed Floyd Collins musical opens on Thursday, February 19th for a two-week engagement at the Station Theatre in Urbana, Illinois.

Directed by Kyle A. Thomas, the performance employs the music and lyrics of Adam Guettel to tell the tragic story of Floyd Collins who, in 1925, while chasing a dream of fame and fortune by turning a Kentucky cave into a tourist attraction, himself became the attraction when he became trapped in a narrow crawlway 55 feet (17 meters) below the surface.

Floyd Collins originally premiered at the American Music Theater Festival, in Philadelphia, in 1994 before a short 25 show stint Off-Broadway at Playwrights Horizons, New York City, in 1996.

Put on as part of the 43rd season of the Celebration Company, the musical runs from February 19th to March 7th. Tickets are a reasonable $15.00 during the Friday and Saturday performances and only $10.00 on Wednesday, Thursday and Sunday.

For more information or to make your reservation online, visit the Station Theatre website.