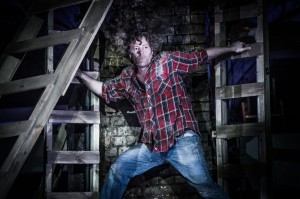 Floyd Collins, the musical about a caver by the same name that became trapped in a Kentucky cave recently opened at London’s Southwark Playhouse to rave reviews.

Written by Tina Landau and Adam Guettel, the musical follows the tragic story of pioneer caver Floyd Collins who, on January 30, 1925, became trapped while trying to discover a new entrance to Kentucky’s Sand Cave.

While stuck in the narrow passage about 17 meters (55 feet) below the surface, Collins and the attempts to rescue him became a became a newspaper sensation.

Unfortunately for Floyd the story doesn’t end well. After a collapse of the passage used by rescuers to reach him, a shaft was dug. By the time they reached him 13 days later, Floyd had already died from exposure and hunger.

I have waited for 13 years – ever since the Bridewell gave Adam Guettel’s musical its British premiere – for a revival of Floyd Collins. I’ve written to theatres begging them to put it on, pleaded with Radio 3 to give it an airing, plugged its merits in this column. To no avail. But now the enterprising Southwark Playhouse has given Floyd Collins a magnificent production. Susannah Clapp, The Guardian

For more information, including show times and tickets visit the Southwark Playhouse website or call 020 7407 0234. The production runs until the end of March.

Floyd Collins – Southwark Playhouse, London [The Public Reviews] & Floyd Collins; Goodbye to All That; The Leisure Society – review [The Guardian]