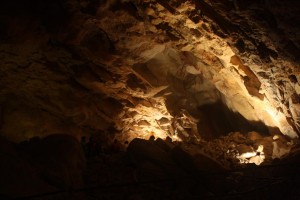 A 10-year-long cave dig in Arizona’s Grand Canyon Caverns has hit pay dirt after cavers broke through into a new room.

Fox 10 Phoenix reports that a small but dedicated group of Arizona cavers started digging at the back of the popular tourist cave where they could feel a breeze blowing through a crack.

The group worked tirelessly for years until they stumbled upon an entrance to a new section, never seen before by human eyes.

When we found this entrance everybody was so excited because we finally had broken through. Michael Dashofy

Inside crystal formations line on the ceiling, while others fill the floor. So far only a small number of visitors have entered the new section.

Nothing has been touched, everything is untouched, that’s the goal, to go into a virgin cave, to go where no man has gone before. Michael Dashofy

Although the find is exciting, this breakthrough is believed to be just the beginning of a much larger passage.

Yes, and we haven’t found it yet, but we found a lot. Michael Dashofy

First explored in the 1920’s, Grand Canyon Caverns are the largest dry caverns in the United States. It is characterized by its lack of stalagmites and stalactites.