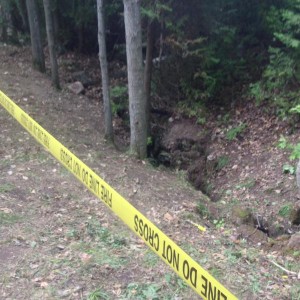 The crevice where the man was trapped.Photo by Ian Adams/Twitter

A solo cave explorer spent more than 13 hours trapped in a southern Ontario cave over the weekend after getting stuck in a deep crevice.

In a story that turned out better than recent 127 hours movie, The Barrie Examiner reports that hikers in the Nottawasaga Bluffs just outside Springhampton raised the alarm on Saturday evening after they heard the man’s calls for help.

Arriving just before 8:30pm, rescuers found the man wedged between rocks 12 meters (40 feet) below the surface.

A joint effort of more than 50 rescuers from the Toronto, Barrie, Simcoe County and Clearview Fire Departments worked through the night during the complicated extraction.

While teams worked to break away rock in an attempt to widen the opening, the man, identified as 32-year-old Seth Row, was kept warm in the freezing ice filled chamber via a tube blowing hot air.

Eventually, just before 10:00am on Sunday, the man was finally brought to the surface and taken to hospital in stable condition.

[via The Barrie Examiner]