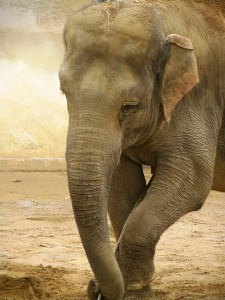 In a rescue operation that lasted more than 4 hours, Indian forest rangers saved a 15-year-old female elephant that had become trapped in a crevice in the Periyanayakanpalayam forest range near Thadagam in southern India.

Last Wednesday anti-poaching watchers heard the elephant trumpet and went to it’s aid. The found it later that evening trapped in the cave.

Officials suspect that the elephant entered the cave in order to drink water when she became lodged in the deep slippery crevice.

To facilitate the rescue the elephant was first fed bananas and sugarcane for energy, and then the team filled the crevice with sand and stones until the elephant could step out on it’s own.