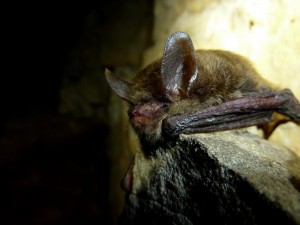 The U.S. Fish and Wildlife Service have announced that the Northern Long-eared Bat (myotis septentrionalis) will be listed as threatened species under the Endangered Species Act.

The Service initially proposed the northern long-eared bat as “endangered” in October 2013 following severe population declines due to white-nose syndrome, a disease that has killed millions of cave-hibernating bats of many species in the United States and Canada. However, during its review, the Service determined the northern long-eared bat was better suited to the lesser “threatened” classification.

White-nose syndrome has not yet been detected throughout the entire range of the northern long-eared bat—found from Maine to North Carolina on the Atlantic Coast, westward to eastern Oklahoma and north through the Dakotas, reaching into eastern Montana and Wyoming—and will not likely affect the entire range for some years.

The species appears stable in areas not yet affected by disease, mainly in the western part of its range. It also still persists in some areas impacted by white-nose syndrome, creating some uncertainty as to the timing of the extinction risk posed by the disease.

In making this decision, we reviewed the best available scientific information on the northern long-eared bat, including information gathered from more than 100,000 public comments. We are listing this species because a disease – white-nose syndrome – is spreading and decimating its populations. Tom Melius, U.S. Fish and Wildlife Service Midwest Regional Director

The listing becomes effective on May 4, 2015, 30 days after publication of the final listing determination in the Federal Register.

In addition to the threatened designation, the Service has issued an interim special 4(d) rule that enables the Service to tailor protections to those that are “necessary and advisable to provide for the conservation of such species.” It also enables prohibitions that do not further the conservation of the species to be relaxed, reducing the regulatory burden on landowners, land managers, government agencies and the general public.

We designed the 4(d) rule to provide appropriate protection within the area where the disease occurs for the remaining individuals during their most sensitive life stages, but to otherwise eliminate unnecessary regulation. Tom Melius, U.S. Fish and Wildlife Service Midwest Regional Director

Some human activities also impact these species, particularly close to their hibernation sites, creating heightened challenges for bat populations already weakened by disease and underscoring the need to protect important habitat while research continues to develop a cure for white-nose syndrome.

These activities include forest management practices, maintenance and limited expansion of transportation and utility rights-of-way, removal of trees and brush to maintain prairie habitat, and limited tree removal projects.

Meanwhile, in parts of the country not affected by white-nose syndrome, the 4(d) rule recognizes that the incidental harming of bats in areas not affected by WNS is not imperiling the species, and thus those bats would be exempt from the act’s protections.

The decision to list the bat as threatened with an interim 4(d) rule represents a biologically sound determination that will address the conservation needs of these bats while providing flexibility for those who live and work within the bats’ range. Looking ahead, we expect to continue working closely with the Service as we focus on finding the right solutions to this conservation challenge. Keith Creagh, Michigan Department of Natural Resources Director

The public is invited to comment on this interim rule as the Service considers whether modifications or exemptions for additional categories of activities should be included in a final 4(d) rule.

Comments will be accepted until July 1st, 2015 with the rule finalized by the end of the calendar year.