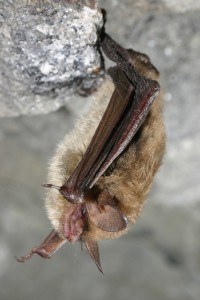 The U.S. Fish and Wildlife Service have announced that the eastern small-footed and northern long-eared bats may indeed warrant federal protection as threatened or endangered species, after an an initial review of a petition received in January, 2010 from the Center for Biological Diversity requesting to protect both species under the U.S. Endangered Species Act.

The argument of the petition is that the continued existence of one or both of these species may be threatened by a number of factors such as habitat destruction and degradation, disturbance of hibernation areas and maternity roosts, and white-nose syndrome.

The northern long-eared bat occurs across much of the eastern and north-central United States and across all Canadian provinces west to the southern Northwest Territories and eastern British Columbia, although the species is variably distributed and rarely found in large numbers.

The next step is to initiate a thorough review of both bats to determine whether these species fit the critera to be added to the list of federal endagered and threatened wildlife. This thorough review will examine information on distribution, status, population size or trends, life history and threats.