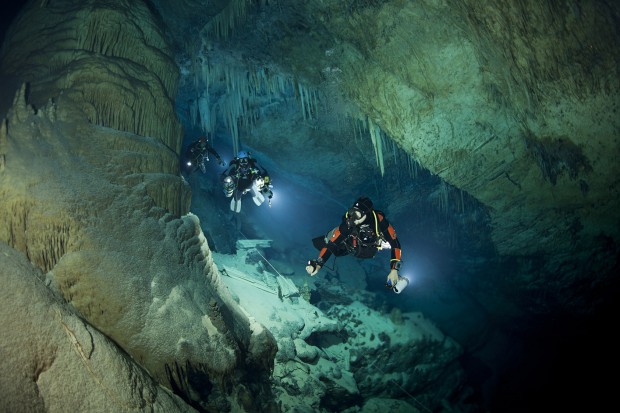 Tom Iliffe diving in a Bermuda cave where he found blind crustaceans. Photo by Jill Heinerth

Scientists studying cave-dwelling crustaceans have determined that, as they evolved without eyes, their other senses improved to compensate for the lack of sight.

In work, published in the current issue of BMC Neuroscience, researchers in the US and Germany examined the brains of three cave-dwelling crustaceans; Mictocarididae from Bermuda, Spelaeogriphacea from South Africa and Thermosbaenacea from Italy.

What all three species have in common is that they are blind, and have only small stalks where their eyes used to be present.

These animals first colonized caves at a time when the continents were still connected to each other and most of the world was one big land mass. This was at least 180 million years ago, a time when dinosaurs dominated the Earth. Since then, these small crustaceans have lived underground in total darkness all this time, so there was no need for vision or even eyes. Thus, they were forced to live without sight, and they are still living like that today. It’s what is known as ‘regressive evolution’ – when evolutionary processes go in reverse and body features are lost due to non-use. Tom Iliffe, Texas A&M University Professor of marine biology

Without light, the creatures were forced to adjust, losing not only their eyes, but having major changes to their brain and nervous system also occurring.

Their olfactory lobes which control the sense of smell and taste were enhanced and became better developed as they lost their vision. As their optic nerves were disappearing, their other senses were taking over. In other words, the changes in their environment changed these crustaceans themselves. Tom Iliffe, Texas A&M University Professor of marine biology

Enhanced adaptations such as longer antennae and an improved nervous system helped these creatures to obtain food or find mates as they swam or crawled through the caves.

Even with no light in the caves, evolution continued to proceed as it always does – these creatures were able to adapt and survive in this totally dark environment, while life on the surface of the Earth changed radically.

Our findings suggest that these creatures, as they spent longer and longer time in complete darkness, changed independently during this evolutionary process, and they gradually reduced brain functions that were no longer needed.Tom Iliffe, Texas A&M University Professor of marine biology

The project was funded by the German Science Foundation and assisted by the Bermuda Biodiversity Project.