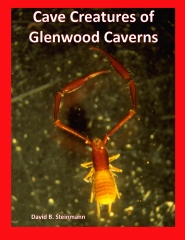 A new book featuring the incredible cave creatures of Colorado’s Glenwood Caverns has just been released to the public.

Filled with color photos of the incredible cave creatures living in Glenwood Caverns, the 34 page self-published book includes never before seen pictures of new species and unique lifeforms. Each species is described in detail and depicted with electron microscope or magnified images.

The book is available is available for $9.95 at the General Store gift shop at Glenwood Caverns Adventure Park, at the Book Train in downtown Glenwood Springs and online at amazon.com.