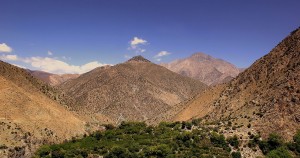 The sole surviving caver, from an incident which left two other Spanish cavers dead, recounted the horrifying ordeal at a press conference on Thursday.

27-year-old police officer Juan Bolivar was the only caver to make it out alive after he spent days at bottom of the 300 to 400 meter (984 to 1,320 feet) deep Wandrass River canyon.

The group of three had been on a trip to explore caves in Morocco’s Atlas mountains when two of the men, lawyer Gustavo Virues and police officer Jose Antonio Martinez, both 41, fell during a climb to bypass a waterfall.

I saw them talking to each other [Gustavo Virues and José Antonio Martínez], I looked down for a moment and I saw them fall … it was like a movie. I did not think that was really happening. Juan Bolivar, survivor

Contrary to earlier reports, Bolivar revealed that Gustavo Virues died in the initial fall, while Jose Antonio Martinez survived with a head injury.

In an effort to keep Martinez alive, Bolivar built a snow shelter and a covered him with the clothes of their deceased comrade. There he fed and cared for his injured companion as they waited six days for help.

Eventually two Moroccan gendarmes appeared and sent down a rope and stretcher. Martinez was loaded inside and began being hoisted out of the ravine.

However, somewhere along the way, the stretcher halted with Martinez’s head under an ice cold waterfall. Despite their concern, the gendarmes told them not to worry before they disappeared.

It seems they had been trying to lift out Martinez from the deep canyon, some 180 prounds (80 kilograms), freehand.

Night came, and Bolivar could do nothing but listen to his friend’s cries for help.

Two hours later the Civil Protection of Morocco arrived on the scene, but Martinez, who Bolivar had kept alive for days, was dead.

I listened to him drown. Juan Bolivar, survivor

Bolivar was then informed that the quickest way out was a “a goat track” which he walked for four hours before reaching a village where he was treated and was put on a stretcher.

Companions of José Antonio Martinez, including Bolivar, believe that his death is a homicide due to the negligence of the Moroccan government and have initiated legal action.