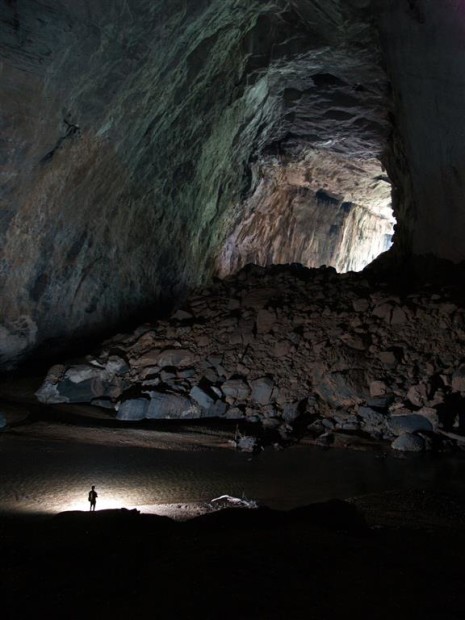 Tourism authorities continue to push for a controversial cable car at Vietnam’s Hang Son Doong, the largest cave on earth.

This news is the latest back pedal by Quang Binh authorities who initially hoped to have the cable car system end inside the cave, and later at the cave entrance.

The project, estimated to cost upwards of $212 million USD was to be built by Da Nang-based real estate and resort developer Sun Group before public outcry led to a 15 year Development Planning Project of Phong Nha Ke Bang National Park which should protect the cave from large-scale construction.

Now it seems the provinces tourism authority is hoping to push it forward anyway.

First discovered by a local in 1991, Hang Son Doong was only explored in 2009 by a team of British cavers who discovered its largest chamber to be more than 5 kilometres (3.1 miles) long, 200 metres (660 feet) high and 150 metres (490 feet) wide, far surpassing Malaysia’s Deer Cave, the previous champion.

Since then, it has slowly gained world-wide attention. Tours, organized by Oxalis Adventures, began in 2013 and are proving to be extremely popular. In addition, a recent video of a drone exploring the cave has further brought the cave into the spotlight.

There are even reports that Hollywood is showing an interest in the cave. Let’s hope that endeavor doesn’t turn out anything like the shoot in Bulgaria’s Devetashka Cave.