People often ask me why I go caving. Surely it is dark, tight, claustrophobic, cold and dangerous and you might get lost – why would anyone want to do this? And for fun?! There are a lot of misconceptions about caving, it isn’t really dangerous – sure it is if you don’t know what you’re doing and if you don’t risk assess; it is if you push beyond your risk assessments, if you compromise with your equipment or don’t plan and train for rescue, but generally it is a safe sport. Contrary to popular assumption it really isn’t easy to get lost underground.

Imagine knowing you’re the first person who has ever visited a new cave – you have no idea what is around the next corner, or how far it is or what is at the bottom of the vertical, black drop below you. You have no idea how many more rivers, crystals, cave pearls, stalagmites or huge caverns you are going to discover and what obstacles you may face in the passage between them. You don’t know where the cave will end – all you can do is keep pushing further. With a select few mates you have given up on life in the real world, opting out of society so that you can focus on spending time in remote locations, getting worn down by mosquitoes, leeches, frostbite, giardia, altitude sickness and exhaustion… Your career decisions are based solely on potential to free up more time to fund new adventures whenever the lure of new cave in some faraway place presents itself. As a result of this addiction, you can never hold down a real job, your friends think you are reckless, your relationships never last and you are always broke… REALLY broke. Yet, when I sit around campfires nursing a broken body, slugging whiskey or rice wine with mates, eating jungle food and bantering with locals whom I would never otherwise have had this intensely close relationship and experience that I’m now having, I know I wouldn’t trade my life with the richest of the rich – these people around the fire have become my family.

I’ve been lucky enough to explore new cave in NZ, Australia, Tasmania, Peru, China, and Europe, but my time spent with the Vietnam Caves Project has been the most exciting. Since 1990 over 150km of cave has been explored in Central Vietnam.

2007 was my second expedition with the British team and the year I began to understand the true meaning of discovery and commitment (and terror!) when we found Tang Shaft. Unfortunately we only had 30m of rope to hand and were several days walk from the road. Vuc Tang became my life’s focus until 2010 when we finally got to return to and descend its impressively wide, sunshine lit, and 255 meter (837 foot) deep vertical entrance pitch. After keeping me awake at night the epic shaft had us gripped for 2 long days as we tried to safely rig ropes to see what was down there. The limestone was so rotten that our rope’s anchor bolts would not stay secured, and car size boulders kept thundering down the shaft every time we touched the walls. When we finally got to the bottom we discovered over 2 km of massive passage and Vuc Tang became Vietnam’s deepest pothole. Yep, 2007 certainly set the scene for what was to come of the ‘Nam project in the impending years…

10 days later I found myself beyond the 100 metre high Hang En cave exit in a remote river gorge surrounded by thick jungle and beautiful limestone karst rising 400 meters (1,300 feet) from the valley floor. Earlier that afternoon we had passed the downstream entrance to Hang Khe Ry, the world’s longest river cave which at 14 kilometers (8.7 miles) long had challenged the 1997 expedition with sustaining swims, cascades and little respite as they bobbed about in the stream way, fighting the current whilst trying to hold position surveying. The discovery had solved a huge part of the puzzle of where the water had come from that made Phong Nha cave – the main resurgence from the limestone block which had gob smacked the first British team, kick starting the project in 1990.

I’d been sent on with jungle guide Mr Khanh to re-find the entrance to a big cave that had been bellowing cloud when he had stumbled across it in 1991. Khanh was currently pointing out a 250 meter (820 foot) vertical limestone wall and in doing so was telling me in our unique, complicated form of communication that we had to climb the face directly and find a way through the thick jungle into the river valley beyond. With 15kg (33lb) packs on our back, a terrifying and seemingly unreal hand-over-hand climb on vines ensued.

A day later I left the locals and headed back through tiger country to where our team was camped. I reported that Khanh couldn’t find the entrance, but had gone ahead with his boys to investigate further. Our permit was due to run out the following morning and so we had to leave the national park. The ’07 expedition had already been a huge success – clocking up 20 kilometers (12.4 miles) of new cave already – the mysterious Hang Son Doong cave was just another reason to re-visit the area in 2009.

In 2008, on a mountain in New Zealand, I fell in love with a kiwi girl and felt compelled to chase her to India, which meant I chose to bow out of the 2009 expedition and postpone my own Vietnamese obsession until 2010. On arrival to Son Trach village the ‘09 team was met by Khanh who triumphantly had re-found the entrance we had searched for 2 years before. On arrival to Hang Son Doong the team climbed down into the entrance and began surveying as they explored. Later, with the aid of a computer program we can make scale drawings and plot each separate cave together, relative in scale and location to other known caves. Son Doong was immediately wider than anything we had seen in ‘Nam before and it quickly became obvious that this cave would give Deer Cave in Mulu, Borneo – then the largest known cave in the world, a run for its money in passage size.

Soon it was confirmed – Hang Son Doong was the “new biggest cave in the world.” The cave had its own weather system and a completely unique eco system whose harmonious interaction with the world above was blended together; both landscapes coupled through massive roof collapses, or dolines as we know them. In places it was hard to tell where jungle stopped and cave began. The cave was not just obscenely big – it was also incredibly beautiful.

Between 2010-2012, National Geographic and various film crews returned with us to document the discovery and write articles. As participants in the least glamorous sport in the world, as far as we were concerned this was rock star status! The incredible photography gave the region some much needed press and re-kick started a dwindling tourism industry. Almost overnight, Son Doong cave became a wonder and one of the most well-known caves on the planet. A local eco-tourism company was granted a permit to run a limited number of guided tours, opening the cave to the public; their conservation policy and audited compliance would ensure the preservation of the cave’s precious environment. Our further exploration and expeditions continued into the massive limestone block and hopefully will continue, unhindered for decades to come.

The Phong Nha national park has always had entry restrictions requiring multiple permissions to gain access. The unique flora and fauna, coupled with some of the oldest karst in the world gives us lots to study and learn about the world through science and consequently we have always supported the restricted access.

According to the assessment of UNESCO, “The karst formation of Phong Nha-Kẻ Bàng National Park has evolved since the Palaeozoic (some 400 million years ago) and so is the oldest major karst area in Asia” and “Phong Nha displays an impressive amount of evidence of earth’s history. It is a site of very great importance for increasing our understanding of the geologic, geomorphic and geo-chronological history of the region.”

Unbelievably, there are current plans for a large Vietnamese entity to cut down a route through the World Heritage Site and build a cable car to Son Doong to carry tourists to Doline 2. Here, hundreds of thousands of tourists will have moderately restricted access to the cave environment, against all UNESCO, expert and local advice it looks like they may get permission.

An international online movement against the development has the intention of informing the Communist Party of Vietnam about the concern for the preservation of Hang Son Doong. Whilst the larger community seems to support and encourage sustainable development in the national park, this type of mass, quick buck tourism is not supported. If you would like to read more about the proposed cable car plans and subsequent petition, then please visit the Facebook page Save Son Doong. 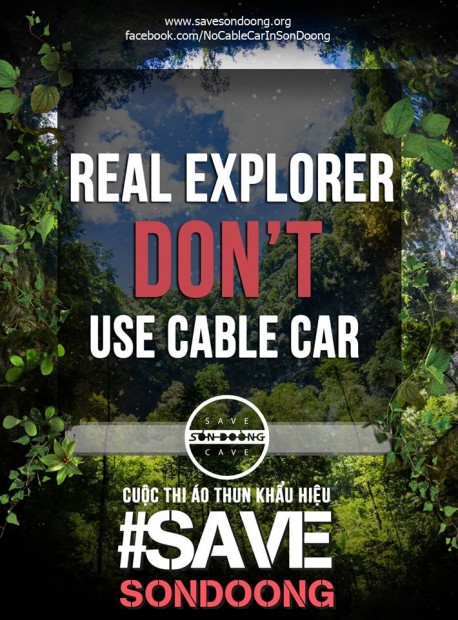