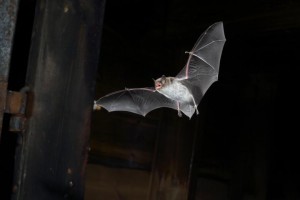 New research shows that bats are capable of making ultra-fast decisions about how to attack their prey—it takes only milliseconds.

Bats use echolocation for orientation. They emit ultrasonic sounds, which hit potential prey nearby, sending an echo back to the bat. From this echo the bat can define where the prey is and attack it.

The new study, published in the journal PNAS, has examined how hunting bats react when approaching their prey. The study concludes that bats are capable of gathering information from the environment and process it surprisingly fast in order to determine how to carry out the attack or maybe call it off.

A bat is capable of adjusting its attack until it is approximately 100 milliseconds away from its prey.

It is surprising that they are so fast. Until now we thought that bats are deploying a kind of autopilot in the last phase of an attack limiting them to an unchangeable behavioral pattern. Signe Brinkløv, Department of Biology, University of Southern Denmark

In both the bat laboratory at the University of Southern Denmark and in nature, the researchers offered prey to the bats. When the bats started their hunt for the prey, the researchers removed it and observed how the bats reacted.

The researchers recorded the sound emitted from the bats and filmed how and when the bats responded to the disappearance of the prey.

As the bats approached their prey, they were continually able to adjust their attack and maybe call off the hunt entirely if we took away the prey. They had this capability until less than 100 milliseconds before reaching their prey. This tells us that bats can process complex information and make decisions in an extremely short time. Signe Brinkløv, Department of Biology, University of Southern Denmark

Researcher Signe Brinkløv points out that qualified decision-making is not to be confused with reflex reactions.

Sometimes we also see reaction times of only 20 milliseconds in bats, for instance in response to loud sounds, but that is a simple reflex reaction that does not require brain workSigne Brinkløv, Department of Biology, University of Southern Denmark

Brinkløv thinks that bats’ ability to make quick decisions is a result of evolution.

They rely on being able to react extremely quickly when they hunt, so I would think that they’ve been under strong evolutionary pressure to develop such expedited reactions in order to survive as a species.Signe Brinkløv, Department of Biology, University of Southern Denmark