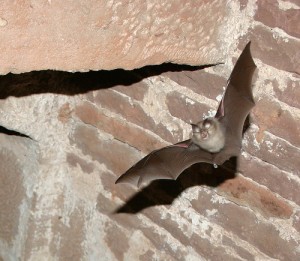 A recent study looking at the frequencies of bat echolocation calls has helped explain why some bats produce much higher frequency calls than others.

It has long been known that the smallest bats produce the highest frequency calls, but no was quite sure why.

The existing theory suggested that the higher frequency calls might be required to detect the smaller prey they hunt.

Now, researchers from the University of Southern Denmark have discovered another explanation. They found that the smaller bats, with proportionally smaller heads and mouths than that of their larger relatives, are forced to produce higher frequency calls to create a sufficiently directional beam to enable echolocation.

As sound beams narrow as the emitter size increases, bats with larger mouths do not need to produce as high of frequency calls for the same result.

To make the discovery the scientists studied the sound emitting from six different bat species of different sizes. They found that each species created similar sound beams despite differences in the frequency and emitter size.

This suggests that bats, and potentially other critters like birds and frogs, can adapt their calls to respond to different environments and situations.

The results of the study are published in the journal Nature.

Pitch perfect: small bats squeak higher, but not due to size [The Conversation]