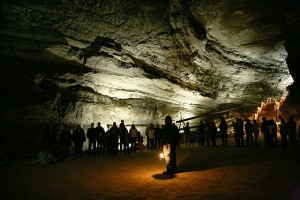 With as much as 80 percent decline in some bat species compared to 2013 numbers, white-nose syndrome is taking its toll on Kentucky’s Mammoth Cave National Park.

In response, Mammoth Cave Superintendent Sarah Craighead requested a visit by the National Park Service’s Disease Outbreak Investigation Team, who traveled to the park in December 2014.

Made up of wildlife veterinarians, epidemiologists, and public health officials, the team reviewed park operations and discussed options with the park managers.

One issue the team examined was the increased potential for contact between bats and humans, both inside and outside the cave. In addition to waking the bats, WNS also causes them to behave erratically, thereby increasing the potential for contact with humans. In 2014 there were eleven reports of such contact in the park.

Bats that have WNS lose their ability to maneuver quickly around objects, like people.

Bats can carry diseases, such as rabies, and though transmission rates are very low, there is a risk that cannot be totally dismissed. However, we consider the risk of a person contracting rabies from a bat at Mammoth Cave to be small. Rick Toomey, Mammoth Cave International Center for Science and Learning Director.

White-nose syndrome, a cold-loving fungus, grows on bats’ bare skin (muzzles, wings, and tails) during their winter hibernation, when their body temperatures and immune systems are reduced. It causes bats to awake from hibernation and fly from the cave, exposing them to the elements and wasting energy and fluids vital to their survival. Dead bats are found to be underweight and dehydrated.

This is a wildlife crisis, unprecedented in our time. There is no known cure for white-nose syndrome. With the help of wildlife veterinarians and public health officials, however, we have developed plans to minimize its spread by visitors traveling from the park. We are also communicating with our visitors and partners, and are responding to changing situations as they occur. Sarah Craighead, Mammoth Cave Superintendent

Currently, the park is continuing with scheduled cave tours, adapting times and routes in response to bat activity. Bat research and bat monitoring are also continuing.

The Park urges visitors who come in physical contact with bats to consult with a trusted healthcare provider.

There is an inherent risk in entering a wild place. Park employees make sure visitors are aware of what they may encounter. The visitors then decide if it is an acceptable personal risk. Sarah Craighead, Mammoth Cave Superintendent