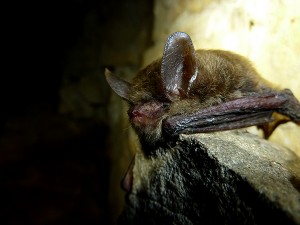 In an announcement earlier today, staff at Kentucky’s Mammoth Cave National Park have confirmed that a bat in the park has tested positive for white-nose syndrome.

On January 4th, 2013 a northern long-eared bat was found in Long Cave showing symptoms of white-nose syndrome. It was euthanized and sent for laboratory testing, which came back positive for disease.

Of the over 400 caves in the park, the 2 kilometer (1.3 mile) Long Cave is the largest bat hibernaculum, containing endangered Indiana bats and gray bats along with other non-threatened species.

The National Parks have a dual role, to preserve natural treasures and to provide a way for people to enjoy them. Our response to challenges such as white-nose syndrome applies the best available science and research to find the proper balance between those roles, and a sustainable future for our parks. Sarah Craighead, Mammoth Cave National Park Superintendent

Although, white-nose syndrome is known to be transmitted primarily from bat to bat, it is suspected that spores of Geomyces destructans, the fungus that causes white-nose syndrome, may be inadvertently carried between caves by humans on clothing, footwear, and caving gear.

Decontamination procedures adopted more than two years ago in an effort to delay its arrival will now help prevent people from spreading it further.

About 400,000 people tour Mammoth Cave each year, providing an excellent opportunity for us to educate the public about the importance of bats and the disease. We screen all visitors before they go on a cave tour and visitors walk across decontamination mats as they exit their tours. Sarah Craighead, Mammoth Cave National Park Superintendent

Long Cave is not connected to Mammoth Cave and has not been open to visitors for more than 80 years.