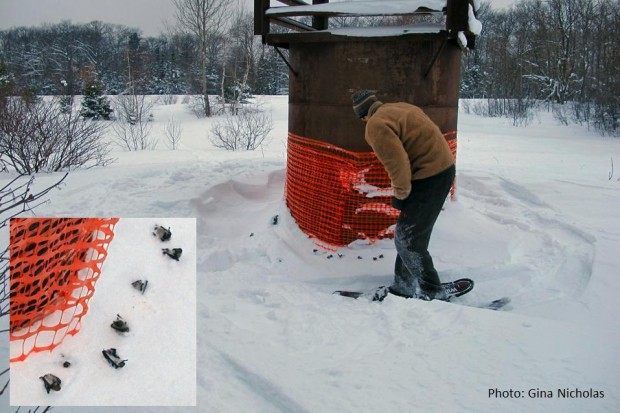 Dead bats with white-nose syndrome at a mine opening in Keweenaw County, Michigan. Photo courtesy of Gina Nicholas.

The Michigan Department of Natural Resources announced on Friday that it has received its first reports this winter of bats dying from White-nose Syndrome.

The dead bats were discovered by members of the public outside the opening of an abandoned copper mine near Mohawk in Keweenaw County and reported to DNR field staff.

Widespread die-offs of hibernating bats in Michigan’s Alpena, Dickinson, Keweenaw, Mackinac and Ontonagon counties had been expected this winter following the discovery of WNS in the counties in late winter 2014.

We understand the public will be concerned, and we share their concern for the plight of these bats. Unfortunately, there is nothing that the public can do to help the bats that are now dying. There is currently no practical way to treat the large number of bats affected by white-nose syndrome. Dan O’Brien, Michigan DNR Wildlife Veterinarian

Experience with WNS in northeastern states suggests that most dead bats will be found within 100 yards (91 meters) of a mine, cave or other hibernacula entrance, although some bats may travel a mile (1.6 kilometers) or more before dying.

As most of the major affected bat hibernacula are located in relatively remote areas, residents will likely not encounter any bats that have died. However, in towns like Iron Mountain, Hancock and Norway, where large numbers of bats hibernate in mines within the city limits, area residents may see dead and dying bats. These bats, which may be on the ground, or roost on trees, buildings or other structures close to humans and domestic animals, cause concern for the potential exposure to rabies.

While there is no connection between WNS and rabies, a virus that infects the central nervous system of mammals, including people, and causes death if not properly treated, bats are the animals that are most commonly found infected with rabies in the state.

In fact, rehabilitation of bats is prohibited in Michigan because of the potential for exposure of humans and domestic animals to rabies.

For public health reasons, it is very important that people not touch bats with bare hands, and to keep children, pets and livestock away from bats. Pets and livestock can also be protected by making sure they have a current rabies vaccination. Dan O’Brien, Michigan DNR Wildlife Veterinarian

Long-term, the agency suggests the best ways to help bat populations recover from the effects of WNS is to stay out of mines and caves where bats hibernate (unless proper biosecurity precautions are taken), become educated about the critical ecological roles bats play, and support bat research and conservation.

Although Michigan DNR has no plans to collect and dispose of bat carcasses, they do ask the public to continue to report any dead bats on the DNR website or by calling 517-336-5030.