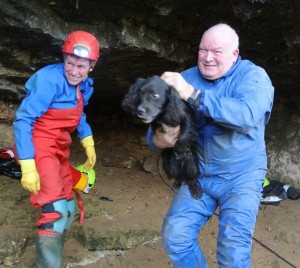 Basil the spaniel after being rescued. Photo via Upper Wharfedale Fell Rescue Association

A dog had to be rescued on Sunday after it became trapped in a cave at Calcutt near Knaresborough in North Yorkshire.

The 9-year-old cocker spaniel, named Basil, was out for a walk with his owner on the outskirts of town when he ran into the cave. Although this is normal behaviour for the adventurous pup, on this occasion he failed to return after the usual few minutes. Suspecting something was up the owner called for help.

Firefighters, assisted by members of the Upper Wharfedale Fell Rescue Association and a specialist from the RSPCA, attended the scene and worked together to free the dog who had become trapped in a fissure some 6 meters (20 feet) into the cave.

Fours hours after the operation began, and six from when he first became stuck, Basil was reunited, unharmed, with his joyful owner.