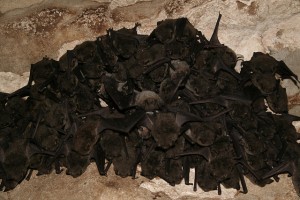 White-nose syndrome has been confirmed in federally endangered gray bats in Tennessee’s Hawkins and Montgomery counties.

Although previously documented in six hibernating bat species, including the federally endangered Indiana bat, this is the first confirmation of WNS in gray bats.

The infected gray bats were discovered during two separate winter surveillance trips, conducted by the Tennessee Wildlife Resources Agency and The Nature Conservancy. White fungus was visible on the muzzles, wing, and tail membranes of several gray bats.

A number of bats were collected and sent to Southeastern Cooperative Wildlife Disease Study at the University of Georgia and later the USGS National Wildlife Health Center in Madison, Wisconsin for confirmation.

While no mortality has been observed in gray bats that can be linked to WNS, the confirmation that gray bats can be infected is cause for concern.

The documented spread of WNS on gray bats is devastating news. This species was well on the road to recovery, and confirmation of the disease is great cause for concern. Because gray bats hibernate together in colonies that number in the hundreds of thousands, WNS could expand exponentially across the range of the species, Paul McKenzie, Missouri Endangered Species Coordinator for the U.S. Fish and Wildlife Service

The confirmation of WNS in gray bats is also alarming because guano from the species is an important source of energy for many cave ecosystems and there are numerous cave-adapted species that could be adversely impacted by their loss. Paul McKenzie, Missouri Endangered Species Coordinator for the U.S. Fish and Wildlife Service

Listed federally as an endangered species in 1976, gray bats are vulnerable due to their habit of almost exclusively occupying only a few caves, living year-round in very large colonies. Efforts to help populations recover by restricting human access to critical gray bat hibernation and roosting sites have been successful.

“We are not sure what this diagnosis is going to mean for gray bats and the spread of WNS, increased vigilance and improved diagnostic procedures may mean that we have identified the very early stages of infection in a new species. It is also possible that gray bats have been exposed for a few years, but do not succumb to the infection. Individual bat species appear to respond differently to WNS, and only research and time will reveal where gray bats fit on the spectrum. Jeremy Coleman, National WNS Coordinator for the U.S. Fish and Wildlife Service