Vote for the 2013 Speleo Photo of the Year 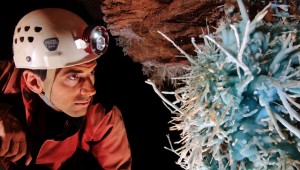 Online voting for the 2013 Speleo Photo of the Year contest has begun.

This year the photo contest had a slow start but later gained momentum and ended with the same number of participants from previous years — 29 participants from 11 different countries, including Russia, Lithuania, Ukraine, Italy, Spain, Slovenia, Slovakia, Croatia, USA, Brasil and South Africa. Due to new limit of five photos per photographer, down from a previous years 15, only 119 photos were submitted.

Organizers from the Lithuanian caving club Aenigma have diligently sorted the photos submitted into five categories; man and the cave, portrait of the caver, reportage of expedition, photo of underground landscape and non-format.

To cast your vote, visit the The Speleo Photo of the Year 2013 online gallery and rate each photo you like from one to five stars. Keep in mind that the star rating you give a photo doesn’t matter because, when tabulated, the total number of ratings each photo has received will be counted.

Voting will continue until February 7th, 2014, after which the photos will be evaluated by a jury of five professional photographers and cavers, with the results of the online voting giving commanding extra weight in their decisions.