Cavers Search For Missing Hiker in Craters of the Moon 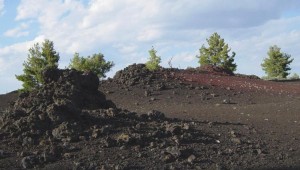 Scoria field at Idaho’s Craters of the Moon National Monument. Photo by Mav/Wikipedia

The 70-year-old woman, along with her 63-year-old friend, Jo Elliott-Blakeslee, were last seen on Thursday September 19th just before they departed on a day hike at Craters of the Moon National Monument.

Reported missing on September 24th, the body of Jo Elliott-Blakeslee was discovered the next day in a remote location of the National Park Service Unit after an Idaho National Guard helicopter search and rescue team spotted it from the air. Officials believe dehydration and hypothermia likely led to her death.

Despite hampered efforts due to the government shutdown which closed the National Monument, the park has received special permission to keep ten additional employees on to continue with the search for the still missing Amy Linkert.

With the help of volunteers, teams have begun searching caves thinking the woman may have gone into one for shelter.There are about 300 known caves in the park, but park staff estimate that there may actually be as many as 3,000.

To help out this weekend, the Silver Sage Grotto National Speleological Society will be organizing to search caves this weekend.

Update: Officials announced that dental records showed that the body recovered on was Linkert, not Elliott-Blakeslee who remains missing.