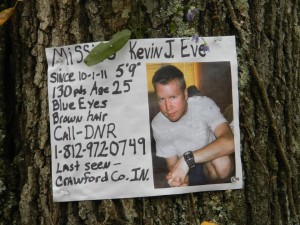 Ground searches ended on Saturday, October 22nd and now the cave searches have been also suspended.

Weeks of exhausting searching in the area where Eve’s car was found, on October 3rd in the Harrison-Crawford State Forest, have led to little evidence of his whereabouts. Area caves have also been thoroughly searched, especially the caves he had been known to explore or were his favourite places to visit.

If you have any information, please call the Indiana Department of Natural Resources south regional office at 812-837-9536.