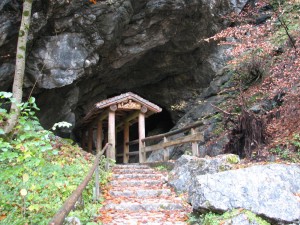 Twenty-six people were trapped in an Austrian cave for hours on Wednesday after the entrance became flooded.

The group, who were presumably on a tour, were cut off from the surface after heavy rain caused a flash flood at the entrance of Lamprechtshöhle cave.

Affecting only the entrance area of the 38 kilometer (23.6 mile) long cave, the visitors were able to wait it out until the water subsided.

During the ordeal, Austrian and Bavarian rescuers were brought in and able to maintain constant voice contact with the group who were in good condition despite being unable to exit.

Once the floodwaters receded in the afternoon, the group emerged from the cave safe and uninjured.

Located in western Austria near Weissbach, Lofer, Lamprechtshöhle is the fourth deepest cave in the world with of a depth of 1,632 meters (5,354 feet).