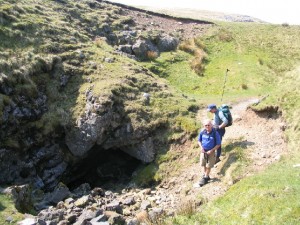 In it’s 41st call out of the year, the U.K.’s Cave Rescue Organisation responded to rescue a party of four cavers who failed to return from a trip on Monday evening.

Upon arriving at the entrance of Ingleborough’s Tatham Wife Hole, CRO rescuers discovered that it was impassable due to flooding following recent heavy rains.

Waiting for the water levels to subside, rescuers were eventually able to enter the cave and found the four cavers, two men aged 43 and 48 and two women, 28 and 29, waiting in the first chamber.

Everyone was safely brought to the surface and then taken to Ingleton Granite Quarries down the road.