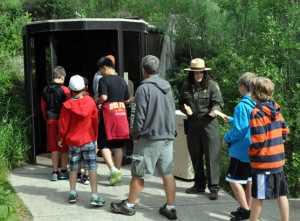 An airlock will be built at Wind Cave National Park this winter to replace the aging revolving door at the caves walk-in entrance.

Constructed in 1992 after a study demonstrated that the unnatural airflow from the artificial walk in entrance was impacting the caves natural humidity and temperature, the revolving door was never designed as a true airlock and the problems have continued.

A study completed in 2005 demonstrated that as much as 60% of the air flow in the area of the natural entrance can pass through the revolving door. Furthermore, with the increasing deterioration of the revolving door and its structure over the past 20 years, it is now allowing unnatural access to the cave for small animals such as woodrats and bats. 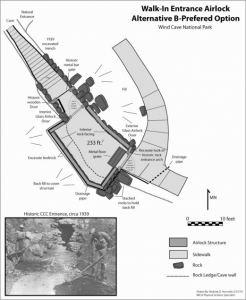 Following an extensive multi-year process, including public meetings and opportunities to comment as well as extensive environmental assessments, officials have now signed off on building their preferred solution to the problem; a two-door airlock system large enough to accommodate a tour of 40 people, the size of a sold-out Natural Entrance Tour.

As part of the plan, the original Civilian Conservation Corps-era rock entrance arch would be uncovered and made visible for the first time since 1992 when the revolving door was constructed. Additionally, the the existing wooden door and metal bar gate that were used previously, will be repaired and replaced in their original positions.

Construction will start this fall and will be funded by revenue generated from cave tour fees. Vidal Davila, Wind Cave National Park Superintendent

For more information, including a copy of the Environmental Assessment Plan and the Finding of No Significant Impact, visit http://parkplanning.nps.gov/wica.