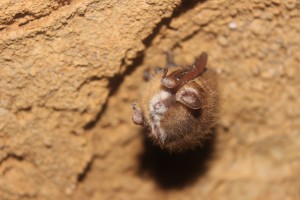 White-nose syndrome has been detected on bats hibernating at Fern Cave in Jackson County, Alabama.

The news, announced yesterday in press releases by the U.S. Fish and Wildlife Service and the Southeastern Cave Conservancy, the two co-owners of the cave, has caused concern for the caves colony of over one million federally listed endangered gray bats.

Although WNS is not currently known to cause mortality in gray bats, the species tens to live in very large numbers in only a few caves, making them extremely vulnerable to disturbance.

For over 30 years, NSS members have also been key U.S. Fish and Wildlife Service partners in the effort to protect Fern’s gray bat colony. It’s a huge blow to all of us who love Fern Cave to know that WNS is now there. We hope the gray bats will survive. Steve Pitts, SCCi Fern Cave Property Manager

Discovered in tri-colored bats at two of the caves five entrances during March surveillance trips by the U.S. Fish and Wildlife Service and members of the National Speleological Society and Southeastern Cave Conservancy, several specimens with obvious white fungus were collected for testing. Histopathology at the University of Georgia‘s Southeastern Cooperative Wildlife Disease Study later definitively confirmed the presence of the disease.

As part of the same release, it was announced that bats in three other SCCi-owned caves, Wolf River Cave in Fentress County, Tennessee; Frenchman Knob Cave in Hart County, Kentucky; and Fricks Cave in Walker County, Georgia have also tested positive for WNS this winter.

A team of scientists with the U.S. Geological Survey, the Nature Conservancy, the Tennessee Wildlife Resources Agency, and the U.S. Fish and Wildlife Service visiting Wolf River Cave in mid January found one of the 2,421 bats observed, exhibiting signs of WNS. Submitted for testing it was later confirmed that the bat was affected by WNS. Interestingly, the team noticed changes in the roosting pattern of bats inside the cave.

Then on March 9th, an SCCi member observed signs of the WNS fungus on five of about 60 tri-colored bats in Georgia’s Fricks Cave. Following discussions with the SCCi board of directors and officials from Georgia Department of Natural Resources, one of the bats was submitted for analysis where it to was confirmed positive for WNS.

We are disappointed, but not surprised, that WNS has been confirmed in four of our caves. WNS is unfortunately becoming increasingly well-established throughout the region in caves that contain hibernating bats, continuing a pattern of spread that is consistent with bat migratory routes. The SCCi, working together with our volunteer managers and our conservation partners, continues to make every effort to ensure that the bats that depend on our caves for critical habitat are well protected. Unfortunately, no cave management strategy, including complete closure to human visitation, has had any demonstrable effect at slowing the spread of WNS; WNS affected bats are readily transmitting the disease to uninfected bats.

We have learned the hard way that abandonment is not management, and as a result the SCCi board will continue to use adaptive management techniques to ensure that bat populations and fragile cave environments are well protected while still allowing for reasonable public access. Ron Miller, SCCi Chair