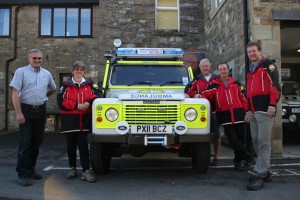 In its 15th incident of the year, Clapham’s Cave Rescue Organisation came to the aid of a French student suffering from hypothermia inside North Yorkshire’s Gaping Gill.

The 31-year-old student, studying in Belgium, was part of a group of 23 cavers from Belgium who had been exploring the popular cave system on Wednesday, April 3rd.

A leg injury during the trip had caused him to make slow progress ascending up the Dihedral Route, which runs next to the 104 meter (341 foot) main shaft, resulting in him becoming hypothermic and hung up on the rope.

CRO members training in Kingsdale were alerted and made their way to the cave.

On their arrival, just before 8:00pm, they found that the man’s companions were slowly hauling him to the surface via the Jib Tunnel. Now only about 40 meters (131 feet) down, he had been trapped on the rope for some two to three hours.

With the assistance of CRO members, the casualty was quickly brought the rest of the way to the surface where he was examined by a doctor.

Following warm air hypothermia treatment, the man was stretchered across the moor until a RAF helicopter arrived which airlifted him to hospital.