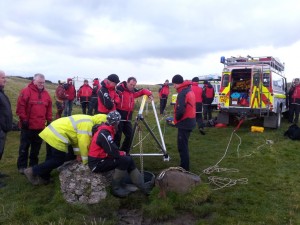 In their 62nd rescue of the year, the UK’s Cave Rescue Organisation responded to a caver suffering from hypothermia.

The 45-year-old caver was on a through trip from Old Ing Cave to Dismal Hill Cave in the Yorkshire Dales when he ran into serious trouble this past Sunday.

The caver was pulled from deep water in the canal beyond Swift Falls Chamber by a companion and CRO was called.

After being successfully brought to the surface via Dismal Hill Cave, the caver was treated by one of the CRO doctors and taken by a CRO rescue vehicle to an ambulance in Horton in Ribblesdale.