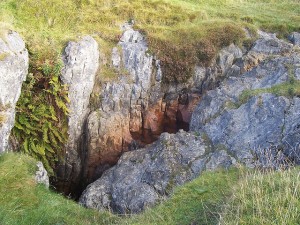 The Entrance to Sell Gill Holes in North Yorkshire. Photo by Bods/flickr

A 70-year-old caver had to be hauled out of Sell Gill Holes during a rescue on Sunday by Yorkshire’s Cave Rescue Organisation.

The man, suffering from a medical condition, collapsed at the foot of the entrance pitch on the Fossil Route.

After being stabilized by the CRO, the man was lifted 9 meters (30 feet) to the surface and taken, via stretcher, across a field to a waiting ambulance.

This was the CRO’s 64th call out of the year.