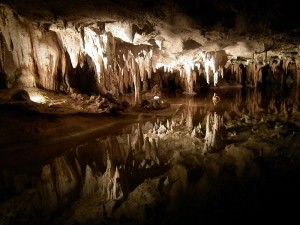 All is not well at Virginia’s Luray Caverns.

A recent article in the Washington Post has shed light on a huge family dispute that has seen the popular attraction as the subject of near-constant litigation for most of the past 10 years.

As the third most popular show cave in the United States, trailing only Kentucky’s Mammoth Cave and New Mexico’s Carlsbad Caverns, the family is fighting over a business estimated to be worth some $20 million.

First discovered in 1878, the cave was eventually purchased in 1905 by Theodore Clay Northcott. All was fine when succeeding generations had only one offspring, but that all changed when his grandson, Ted Graves, had six children. It is those children, divided into two camps, who are now fighting for control of the empire.

Read all about in the fight over the future of Luray Caverns.