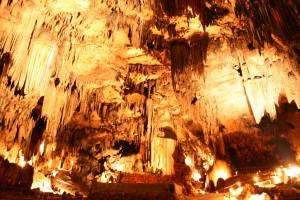 Inside the highly decorated main cavern at Desoto Caverns. Photo by Tennessee Wanderer/flickr

The event, scheduled for this Saturday, June 13 and Sunday, June 14 from 9:00am to 5:30pm, will feature multiple Native American Tribes performing in their vibrant, native regalia.

In addition, continuous entertainment throughout both days will include various Native American dances, drumming acts, storytelling, basket weaving and bead work demonstrations and many other Native American traditions. A variety of craft and food vendors will also be in attendance.

The festival gate fee is $10 for adults, $8 for children 5-11, and children 4 and under are free. There will be free parking available.

First opened as a commercial cave 1965, Desoto Caverns was previously used as a Native American burial site and a source of minerals used during the Civil War.