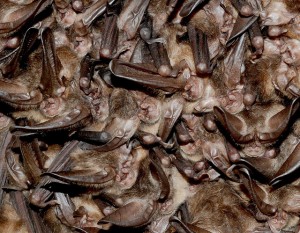 A recent bat survey at Hellhole, West Virginia’s largest and most important bat cave, has discovered further devastation of its bat population due to white-nose syndrome.

On February 23rd three crews conducted the biennial survey in the cave, once home to over 110,000 bats.

Since first being discovered at the Pendleton County cave in January 2010, crews have seen bat populations plummet by nearly 90%. The little brown bat population, once by far the most numerous with a population of around 90,000, has now declined to a mere 2,461 individuals.

Populations of the federally endangered Indiana bat tell a similar story. Despite showing an increase of some 5,000 bats to number over 18,000 during the previous survey in 2010, the latest counts have them down to only 2,540.

The only good news garnered from the survey is that the Virginia Big-eared bats don’t appear to be susceptible to WNS, as no bats were found with WNS in either 2010 or 2013.

Although the Virginia Big-eared bats counts declined over the 2010 results, the data still shows an increase of over 50% over the 2007 results and it is suspected that this winters decline is probably due to some of the bats being in some other, unknown part of the cave. This suspicion is reinforced by the counts at summer maternity colonies which indicate the population is increasing.

While the Virginia Big-eared news is good, the data for the two hard-hit species is very bad. Anyone who thinks that WNS has slowed, or that large mortalities are not still occurring is simply mistaken. Peter Youngbaer, White Nose Syndrome Liaison