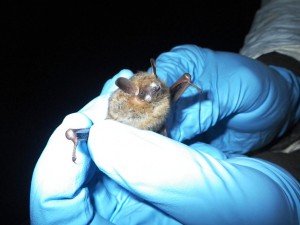 The South Carolina Department of Natural Resources has announced that a dead bat, discovered recently at Table Rock State Park in northern Pickens County, has been confirmed positive for white-nose syndrome.

This marks the first infection in a state that appeared, until now, to be insulated from the disease.

The dead tri-colored bat was discovered by Table Rock State Park staff and collected for testing on February 21st. It was taken, transported on ice, to the Southeastern Cooperative Wildlife Disease Study in Athens, Georgia, where the presence of Geomyces destructans, the fungus which causes WNS, was confirmed.

We have been expecting WNS in South Carolina. We have watched the roll call of states and counties and Canadian provinces grow each year since the first bat deaths were noted in New York in 2007. Mary Bunch, South Carolina Department of Natural Resources Wildlife Biologist

With the addition of South Carolina, WNS has now been confirmed in 21 states and five Canadian provinces.

The news that white-nose syndrome has been confirmed in South Carolina is devastating for these very important mammals. We will continue to work closely with our partners to understand the spread of this deadly disease and to help minimize its impacts to affected bat species. Mary Bunch, South Carolina Department of Natural Resources Wildlife Biologist

Table Rock’s bat colony is located in a remote part of the park not accessible to the public.