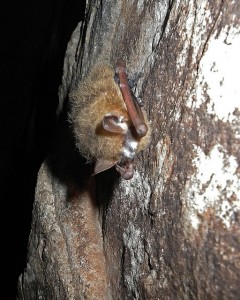 The Alabama Department of Conservation and Natural Resources has just announced that white-nose syndrome has been confirmed in bats found in the Russell Cave system in Jackson County, Alabama.

It was discovered on March 1st when a team conducting a bat survey in Russell Cave on March 1st found a number of bats displaying symptomatic white patches of fungus on their skin.

Two tricolored bats and tissue samples from a Northern long-eared bat were collected and sent to the Southeastern Cooperative Wildlife Disease Study unit at the University of Georgia which, after testing, confirmed the presence of white-nose syndrome.

We have worked closely with Alabama Department of Conservation and Natural Resources and the Alabama Bat Working Group to prepare for white-nose syndrome. Now that it is confirmed here, we will continue to work with the state and our federal partners in their research and management of the disease. Mike Armstrong, USFWS Regional WNS Coordinator

At 11.6 kilometers (7.2 miles) long, the Russell Cave system is the third longest mapped cave in Alabama. Recreational caving at the site is not permitted due to the presence of rare and endemic species. It is part of the Russell Cave National Monument which is managed by the National Park Service.