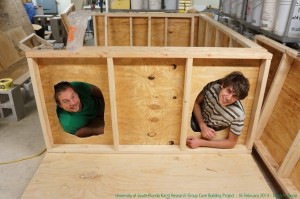 Jeremiah Smith (left) and Blake Lazzeri (right) pose in the interior constrictions just after cutting them. Photo by Lee Boop

I couldn’t wait to try Dave Jackson’s patent-pending CaveSim at the 2012 NSS Convention. I, along with everyone I know who crawled through it, thought it was truly innovative idea to send cavers through an obstacle course of replica speleothems equipped with sensors that will beep if touched.

As I spoke with Dave after my crawl, I expressed interest in bringing his CaveSim to the 41st Annual University of South Florida Engineering Expo, scheduled to be held February 22nd and 23rd, 2013. It wasn’t long before we realized that the gasoline required for Dave to haul the CaveSim from Colorado to Florida would cost much more than for us to build our own artificial cave, which we would be able to use at future events. 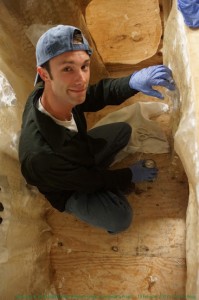 Dave worked closely with us on our Engineering Expo Grant application, which awarded us $1,477 to build our cave.

With the funds the secured, we began construction of a 2 meter by 2.5 meter (6 foot by 8 foot) floor. Unfortunately, it was soon realized that it was not large enough, and Karst Research Group funds and private donations were used to double the size of the cave.

Once the shell of the cave was completed, we began work on the details. We secured poultry wire to the interior, which we then covered with fiberglass cloth and epoxy resin. Before the wall resin dried, we set fossils donated from the Florida Museum as well as chunks of limestone and chert collected from the Vulcan Materials Brooksville Calcium facility into the walls. 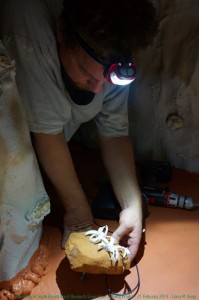 Jeremiah Smith places the CaveSim Gypsum Flower sensor. When cavers get too close to it, LED’s beneath it flash, and a voice says, “Uh oh, you got too close to the gypsum flower. Watch out!” Photo by Lee Boop

We touched up the walls with spray foam insulation and finally painted them, accenting the walls with several different colors and textures of spray paint. The floors were painted a very nice shade of cave mud, and the entrance was decorated with fake ferns and green spray paint to simulate mosses.

Inside the passages we installed the five amazingly realistic artificial stalactites that we purchased from CaveSim, along with the CaveSim sensors and supporting electronics. Each hand-crafted stalactite was carefully detailed with artificial water running down the sides and poised to drip off the end. The stalactite sensors are each a tiny computer that buzzes and flashes with light when a caver bumps into the formation, and which can be networked to a computer.

A student excited to enter the cave. Photo by Lee Boop

The Engineering Expo attracts mostly school field trips on Friday, and families and extra-curricular youth groups on Saturday. To our surprise, we were on the Engineering Expo Scavenger Hunt (“How do caves in Florida form?”) – which meant that anyone who wanted to complete the scavenger hunt had to come to our exhibit.

Sending kids through individually, we quickly accumulated a long line, so we started sending visitors in two or three at a time. People who waited an hour and a half to go through our cave said that it was “TOTALLY WORTH IT!” – so I suppose that our hard work paid off.

We are looking forward to developing supporting educational materials for our cave, including having students identify fossils in the walls, or adding the CaveSim formations to a map of the cave. The exhibit will be open for future Engineering Expos, the bi-annual Geo Expo, and by appointment.

We cannot express enough gratitude to Dave Jackson. From writing the original Engineering Expo Grant application through writing this article, he has always been available to offer useful insight into the project. He always picked up the phone when we needed a bit of guidance. Thank you, Dave, for helping this project go so smoothly (unlike some of the sections of our fiberglass!). 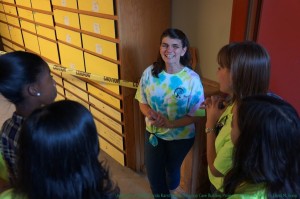 Jackie Sampson, Karst Research Group Vice President, explains that just like in a real cave, cavers should try to minimize their impact, and that the sensors in our cave will beep and flash if touched. Photo by Lee Boop 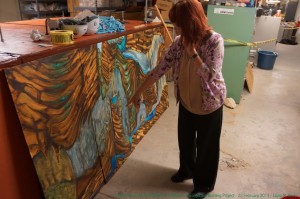 Carolina Shrewsbury graciously donated four astounding panels for us to display outside our cave. Here, she explains she portrays water traveling through the karst system. Photo by Lee Boop

Check out more photos of the project, from construction to our grand opening, on the Karst Research Group’s Google+ Page.

If you haven’t seen the CaveSim firsthand, I encourage you to explore the CaveSim website to learn more about Dave’s incredibly cool project, including how to build your own CaveSim.